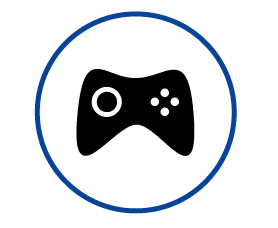 Imagine yourself entrenched in the greatest Capture the Flag game ever in the history of all time.  You have made it through all of the craziness of the field to get to the opposing team’s flag.  Just as you are about to grab the flag, your screen freezes.  In that exact moment, the other team is able to grab the other flag and scores a victory.  This is precisely what happens to many online gamers.  The failure is not due to a lack of skill, but a lack of Internet speed.   SyncWave can save the day for many gamers by eliminating “lag” from occurring.

There are two primary metrics used to measure Internet speed.  First, the amount of megabits per second (Mbps) measures the amount of bandwidth available on a connection.  Second, latency is an important factor that many Internet providers don’t even talk about.  Latency is the time that it takes for data to travel from your device to an Internet server, then back to your device.  Latency is measured in milliseconds (ms), and the lower the number the better.

SyncWave has some of the lowest latency around, meaning that gamers’ entire planets are saved from doom, every single day.  Still, what does that mean?  In performance comparisons to local area satellite, DSL, and similar Internet companies, SyncWave outperforms in every case by large margins.  The company’s wireless Internet even rivals Charter Communications in terms of low latency.  In recent side-by-side comparison tests, SyncWave’s service offered a 11-15 ms ping, while Charter offered 21-101 ms ping.  With online gaming, low latency is most important.  With 3-6 Mbps of bandwidth and SyncWave’s low ping times, you can have an amazing gaming experience.

When gamers choose Internet in surrounding counties, they choose SyncWave.  The company’s wicked fast Internet and low ping times allow gamers to command and conquer in their most desperate hours.  Frag hard and play on, knowing that SyncWave has your back when it comes to gaming!